The woad mill of the 17th, 18th and 19th centuries was usually constructed near the woad field. Woad rapidly exhausts the soil and needs to be rotated, so the woad mills were often demountable to be able to follow the crops. People who worked in the mill were called waddies. They followed the crop around in small family groups, taking the temporary mill with them. They had stained hand and blue fingers nails.

The last portable woad mill to stay in production in England and Europe was at Parson Drove, Cambridgeshire. It was erected in many places, until it finally came to rest at Parson Drove and was pulled down in 1914. This mill was a temporary structure that moved to the area of the crop. For a few more years mills that had permanent sites produced small quantities of woad, but by 1932 farms had stopped growing woad.

The Parson Drove mill was a structure of turf wall lined with wood, with a cone-shaped roof of hurdles thatched with reeds. This is the area used for grinding the leaves. There were two further wings to the building and a series of drying ranges. In contrast to Parson Drove, a much larger mill in Lincolnshire was housed in relatively ‘modern’ buildings, located next to a waterway providing transport for the processed woad. 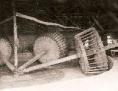 At the beginning of April, the workers started to prepare land and sowing woad seed. Children of poor people were employed to hand weed the woad fields. Harvest began end of June and carried on till end of November or even beginning of December.

The woad leaves were usually plucked in the morning and carted to the crushing mill. The leaves were fed into a circular trough where they were crushed by three large wheels. A horse was attached in harness to each wheel, and the animals walked around the edges of the trough, pulling the wheels. 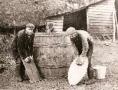 The woad pulp was then thrown into one of the two wings of the mill building where it was allowed to drain before being made into balls by rolling by hand on a board.

The balls were then carried to the drying racks. In about three weeks the balls would have become dry and shrunken (inside the ball, anaerobic bacteria would transform the indoxyl into indigotin. When dried the balls were ground again, either in the same mill or they were broken with a hammer and then taken to a dark building without windows. The compost-like substance was spread 3 feet deep in the ground of the building. 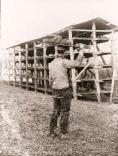 The next process was couching, a moist second fermentation that reduces vegetative matter without changing the indigotin. This fermentation process is similar to the one used by Japanese dyers for Japanese Indigo. As far as I can see, the main objective of couching was to reduce the bulk of the woad balls and therefore concentrate the indigotin. After couching woad can be dried, ground to a powder, packed and stored or used.