Woad in Europe & the Mediterranean from Neolithic to Present

Woad is native to the Mediterranean, originating in Turkey and the Middle East, from where it spread into Europe. As early as the Neolithic, 5 to 10,000 years ago, woad seeds were stored for future use (see Barber - Prehistoric Textiles). Blue-coloured bast fibre, presumed to be linen or hemp dyed with woad, was found in the French cave of l’Adaouste, Bouches-du-Rhône (by Cotte and Cotte in Barber - Prehistoric Textiles).

Woad and indigo were used by the ancient Egyptians: dyes have been found on cloth of about 2500 BC. and on later mummy wrappings, though they were apparently not in common use until 300 BC. Linen is a difficult fibre to dye, so colour was used sparingly, mainly in the border of fabrics. 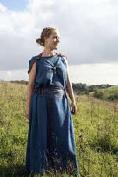 Blue-dyed textiles were found in the Hallstatt chieftain burial sites of Hochdorf and Hohmichele, Bavaria (800 to 400 BC).

An Iron Age grave (circa 1st century AD) at Loenne Heath (Lønne Hede), close to Varde, Denmark, was found to contain a young girl wearing a blue dress, comprising a blue blouse and skirt, with edgings and borders in intricate blue and red patterns. The blue colour is said to come from woad (photo courtesy of Lejre Research Centre).

A box of woad seeds were also included in the 9th century (835 AD) Oseberg royal ship burial in Norway. The queen was dressed in a red dress of wool-muslin decorated with silk but the second woman was dressed in a blue twill woollen dress dyed with woad.

Finnish graves from the 8th to 11th centuries show a predominance of dresses dyed with either red or blue dyes, where the blue is dyed with woad.
Back to Top 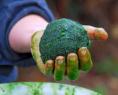 Woad was in widespread use for textile dyeing throughout Europe in Medieval times. By the time of Charlemagne (c. 800 AD), woad was cultivated in Germany and France.

In Germany of the Middle Ages, the very wealthy merchants with the fanciest houses in town were called waid herren (gentlemen of woad), and by 1392, the Saxon town of Erfurt (Thuringia, Germany) had gained enough wealth through the woad trade to establish its own university. Throughout the Middle Ages the major centre of woad production in France was Languedoc and the area earned the name of ‘Pays de Cocagne’ or the land of woad balls.

Indigo replacing woad
Woad produced the only light-fast blue in Europe until the introduction of indigo from Asia. Small amounts of indigo found their way into Europe throughout the Middle Ages, starting as early as 1140 in Europe and 1276 in London.

Initially the hard lumps of indigo were used mainly as an ingredient in artist’s paints. The importation of indigo to be used as a dye was encouraged in the late 1500s. The woad growers, however, uneasy about the competition, persuaded the French government to prohibit the use of imported indigo in early 1600s. Later on, woad and indigo were used alongside each other, the woad assisting the fermentation of the indigo.