Woad in Britain from the Iron Age to Present

The earliest recorded appearance of woad in the British Isles is at an excavation at Dragonby (1st century B.C. and A.D.), South Humberside, from an Iron Age pit.

Many people have heard that when Julius Caesar’s army invaded Britain in 55 B.C., the Romans saw Picts painted blue with woad. There is a great deal of controversy regarding this statement, as it is unlikely that the Roman army, which was mainly in the south, ever came across any Picts, who lived in the north of Scotland. What Julius wrote was "Omnes vero se Britanni vitro inficiunt, quod caeruleum efficit colorem". He referred to the British, not to the Picts, and vitro translates to both woad and to a type of blue glass that was popular among the Romans. 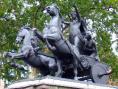 Woad has a long association with East Anglia, the land of the Iceni tribe and of its famous leader Boudicca (photo courtesy of Joanna Richards).

Manda Scott in her four-book series on Boudicca has the Iceni using woad on their bodies before going to battle. Woad is a well-known antiseptic and it may have been used to help heal battle wounds.

Woad was not used only for textile dyes and, for example the illustrators of the Lindisfarne Gospels (late 7th/early 8th century) used a woad-based pigment for the blue. Evidence for use of dyestuffs and vegetative remains of woad plants were found in Viking age York (9th/10th century).

By 1377, Coventry was apparently the fourth largest city in England, a centre of the wool and cloth trade. Blue cloth dyed in Coventry had a reputation for being highly colourfast, i.e. not fading with either washing or exposure to light. The phrase ‘as true as Coventry blue’ originated from this fact, as recorded by John Ray in 1670. The chief commodity imported into Coventry through Southampton from the late 1420s to 1478 was woad for dyeing the Coventry blue cloth.

Woad was used in England throughout the medieval period, much of it imported from Europe. However, the area under woad increased substantially during the 16th century. This was probably because woad supplies from abroad became unreliable and expensive.

Woad cultivation became strictly regulated in the late 1500s in a period of food shortage leading up to the famine of 1586 and concerns that too much land was being devoted to woad rather than to cereals. Queen Elizabeth I issued a “Proclamation against the sowing of woade” on 14 October 1585, stating that the breaking up and sowing of the most fertile ground with woad was a cause of great complaint and that no person was to break up ground for the present nor to sow woad within four miles of a market or clothing town or within eight miles of any house of the Queen’s. This was amended in 1587 to allow no more than 40 or 60 acres of woad in any one parish and no more than 20 acres sown by one person yearly.
Back to Top

Woad has been growing wild on the Mythe, near Tewkesbury in Gloucestershire and in Surrey for at least 200 years.

Right up to the 1930s woaded cloth was used by governments to prevent uniforms from fading. By 1932, farms in the UK had stopped growing woad commercially.

In 2004, the European SPINDIGO (Sustainable Production of Plant-derived Indigo) Project was completed. Ten partners across five countries in a 3.6m Euro project aimed at producing natural indigo to meet the European commercial market. The research used a combination of methods to identify the best strains, growing conditions and extraction methods. The result was an agricultural blueprint for growing woad.

At about the same time MAFF (= UK Ministry of Agriculture, Fisheries & Food)-funded scientists researched the production of inkjet inks from natural dyes, jointly with Willet International. They showed they could produce red, yellow and blue from plants to be used as environmentally-friendly ink. In the end, the company did not pursue the idea commercially.

The popularity of re-enactment societies and of recent films, such as King Arthur (2004) and Braveheart (1995), featuring Picts, Celts, Romans and Scots, has generated a considerable interest in the use of woad as a dye. And recently woad came back into production in Toulouse (Bleu-de-Lectoure) and Norfolk (Woad-inc).